When the Choir was asked to sing on top of the O2, I couldn’t say no. I’ve always wanted to take part in Up at The O2 but never got around to doing it.

The Choir was asked to participate in an event called Twelve Choirs of Christmas at The O2. Our event took place on Sunday 16th December and the event will continue to take place with other choirs between Friday 21st and Sunday 23rd December. Choirs from all over the Nation were asked to bring some Christmas Spirit to The O2, performing for climbers when they arrived at the top. We were asked to prepare a 10-minute set that we would repeat or change it up as we pleased. We were advised to wear sensible clothing for climbing and would be provided with a climb suit.

I had a mad rush to get there after Christmas Carols with Unity A.B.E.P in East London. I jumped in the car and drove like a mad woman to make it on time. When I arrived at the Up at the O2 Base Camp, I was a directed to the rest of the choir and asked to to complete a consent form. The choir were directed to the changing rooms where we were advised on how to put the harness on. We were then allocated climb suits, trainers and boxes to store our personal belongings in which were then locked away.

Once the Choir were all suited and harnessed, we were directed to the lift and taken up to the entrance of the climb.  Suzy, our guide advised us how to use the harness and then the trek began. The climb was very steep and it was definitely a workout, I couldn’t wait to reach the top. My harness got stuck a couple of times but it’s straight forward to get moving again. Once we arrived at the top, the views were amazing. You could see the Canary Wharf and the City to the Emirates Cable Carts and the Excel.

The previous Choir had finished and we were advised where to stand. I took a couple of photos and then got into position for a quick warm up before the first group arrived. As we sang the second song the first group arrived. Once they left the rain came down and we got soaked. Our choir choral books were ruined from the rain so I stopped using mine and tried to remember the words which was very amusing. 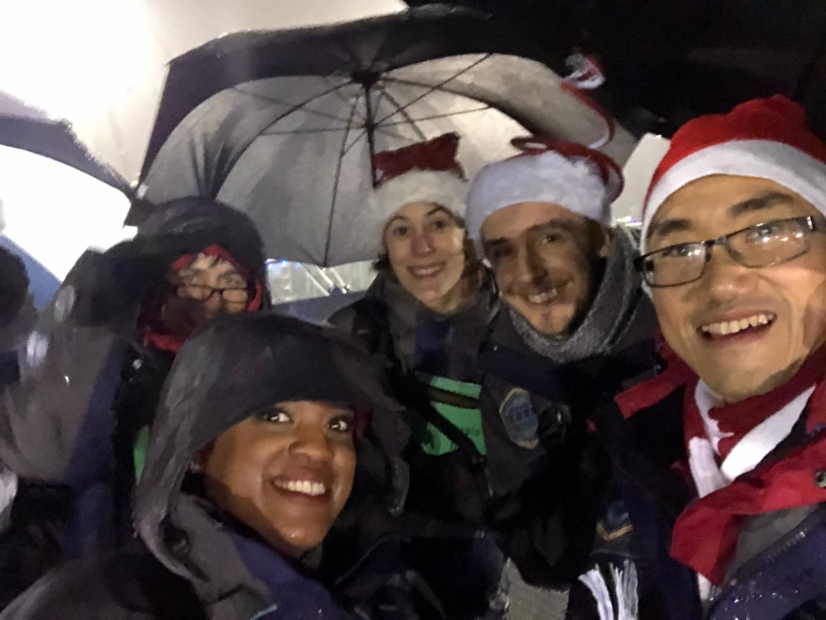 We were offered Mulled Wine or Hot Chocolate and for once I didn’t pick the Hot Chocolate even though I was tempted. The Mulled Wine was delicious, I wanted more but we could only have half a glass. It was the first time trying it and I would definitely have it again.

We sang a mixture of Christmas Carols and Choir repertoire such as Bridge Over You to the second and third group which went down well. While we waited for each group we huddled together under the umbrellas provided by the staff. At one point it was so windy I thought a couple of the choir members were going to have a Mary Poppins moment but fortunately all feet stayed firmly on the ground. Please see a video the Choir singing Silent Night below. Just to warn you it was very windy.

The last group didn’t turn up which was probably due to the weather so luckily for the choir, we got to leave early. The climb down was slippery. When it got to the steep parts of the climb we were advised to turn around and walk backwards. I was happy to arrive at the bottom. All I could think of was getting to a hot bath to warm up.

Overall, it was a great experience even though we got soaked, I would definitely recommend as it’s something different and you get to take in some amazing views.

I hope you enjoyed. Until next time.

Hello and welcome to my blog. My name is Petrina and I wanted to create a blog to share my memories and experiences. View all posts by petrinachristine

This site uses Akismet to reduce spam. Learn how your comment data is processed.